In order to understand the main frame of Turkish-Israeli relations, we should first go over the historical phase of Israel being the main ally of the United States. Looking back, it can be seen that Israel’s existence emerged from the U.N. General Assembly’s “partition plan” (Resolution 181, 1947). At the time, Turkey rejected the “two state solution” resolution, and in addition to this rejection, Turkey was deployed in the Palestine Reconciliation Council in the U.N., along with the U.S. and France (December 1948). Founded in May 1948, Israel was recognized by Turkey in March 1949, which earned the latter the title of being the first Muslim-majority country to recognize Israel. The facts clearly indicate that Turkey had changed its position by 1949.

The historical context clearly shows that bilateral relations were not clearly set, especially during the Cold War era. Turkey was accepted into the Western defense concept with Greece in 1947 as a result of the Truman Doctrine. Turkey was accepted by NATO as a member in 1952, together with her neighbor Greece. In 1955, the Baghdad Pact was established by Turkey, Iran, Iraq, Pakistan and the U.K. After the coup in Iraq, the organization reverted to CENTO. This period also saw the emergence of Israel as an important power. 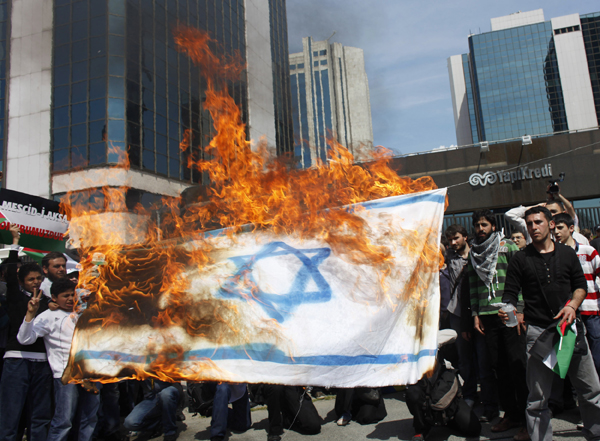 Despite the various negative effects of being on the western axis, the two countries sustained their relations, especially with regard to military, intelligence and defense. Over the years, NATO member Turkey and U.S. ally Israel had an “off/on” relationship. A key point in this relationship came in Aug. 29, 1958, when Israeli Prime Minister David Ben-Gurion and Turkish Prime Minister Adnan Menderes met secretly to form the basis of their nations’ partnership, agreeing upon the “Peripheral Pact.” The signed pact would involve joint public-relations campaigns to influence the citizens of each nation, and exchanges of intelligence information, as well as support for each other’s military advancement.1 Clearly, the Peripheral Pact was structured mainly against pan-Arabism and communism. Thus, the “Trident” intelligence network was established in those years, as it was underlined that bilateral relations were sustained on the axis of military, intelligence and defense.

Turkey’s approach in the Middle East was changed by the conditions of 1960. The détente process created a number of autonomous policies and centrifugal actions in a number of countries.

As has been underlined before, Turkey supported the Arab countries in the 1967 war, and also opened its air corridor to the USSR to provide logistical assistance to Arab countries. After the 1969 Al-Aqsa bombing, Turkey became one of the founders of the Islamic Conference Organization, and during the 1973 war Turkey criticized Israel once more. Meanwhile, Arab countries held an “oil embargo” tool over many countries during those years. According to Baskın Oran(*), from the 1960s to the 1980s, there was relative autonomy in global foreign relations. With the inclusion of the Cyprus operation, Turkey had a chance to behave distinctively from the western bloc. Thus, Turkey’s cultural and religious relations in the Middle East helped facilitate Arab relations between 1960 and 1980.

The end of the Cold War was another key point in Turkish-Israeli relations. The Turkish-Israeli Strategic Agreement was signed in 1996, which was named a “Military Training Cooperation” agreement. As well as other things, it included an exchange of military information, experience and personnel, access to each other’s airspace for the training of military warplanes, as well as joint training activities. The “Defense Industry Cooperation Agreement” of August 1996 provided the framework for the two “upgrading deals” signed in 1997 and 1998 for the modernization of Turkish F-4s and F-5’s.3

“According to Özcan and Bengio, Turkish-Israeli relations reached the level of “alignment rather than “alliance.” There is definitely a tangible crossroad between the two countries, but the inclusion of the U.S., as the supervisor of Turkish-Israeli relations, forms a hierarchical triangle. In this hierarchy, the U.S. generally behaves as a router.

Generally, the term “peace” is used in the context of a post-conflict era or a war. However, in this article, the word is used to point a paradigm that reflects the Middle East in general.

Israeli policies should be carefully examined when criticizing the country’s diplomatic policies. This is because, generally speaking, manipulations on “Jewishness” tend to be provoked. In such cases, discussions on the political-social level trigger the subconscious approach of public opinion, and Turkish-Israeli relations become the victim of the Arab street.

The important point here is that both countries are allies of the U.S. Also, each of them has a modern economy, and they are both ruled by democracy, which is very rare in their region.

Muammar Gaddafi’s “terrible end” has become the symbol of the so called Arab Spring. In the post-Spring era the Middle Eastern balances have become unclear and radical movements have been strengthened. The pessimistic picture includes the unsolved Syrian problem, Iran’s regional problem, the Egypt of the Islamist Muslim Brotherhood, Yemen, and more. In this context, economic and democratic stabilization will determine Turkish-Israeli relations. The post-Spring situation could break up maps, borders and also tribal structures, while ethnic hostility could create chaos. Turkish-Israeli relations therefore have the potential to reduce the risks.

Turkey and Israel both have a bureaucratic tradition and modern social structures, and neither of them wants regional destabilization. Israeli soldier Gilad Shalit’s swap for Hamas militants indicated that Turkey still had a role in the facilitating process, so it can be seen that bilateral dialogue can still sustain and contribute to regional stability.

The lines with potential risks could be the Syrian crisis, Iran’s threat to the west, Turkey’s risks related to NATO’s missile defense shield, Iran’s regular threats to destroy Israel, the withdrawal of U.S. troops from Iraq, Turkish-Iranian competition on Iraq, and more. In this context, a number of problems must be solved for the future of Turkish-Israeli relations. Recently, Turkish-Israeli tension in the eastern Mediterranean was considered dangerous, with Israel collaborating with Greece and Southern Cyprus.

Each problem should be attempted to be solved through diplomatic “dialogue.” First of all, this dialogue must be started for bilateral relations and regional benefits. Two democracies and two modern economies mean “two western countries in the Middle East.” Collaboration has a strategic value for regional democratization and integration into the global economy. Turks and Jews have a tendency to share a common vision, which comes from living together for centuries. At present, the axis of anti-Semitism has shifted to the Middle East from Europe. Today, Israel has became the new target for anti-Semitism. Iran’s denial of the Holocaust and threats to erase Israel from the map is tangible evidence of this. In its history, Turkey has never been host to anti-Semitism. In this context, bilateral relations must be constructed against all the acts of terrorism in the region, in the interests of achieving sustainable peace and stabilization in the Middle East.